Search In the hills

This article was first published in the Tararua Tramper Volume 84, # 7, August 2012

August in the forest with Chris Horne and Barbara Mitcalfe 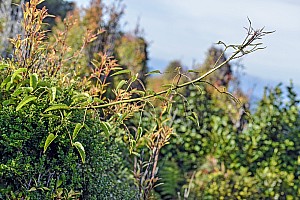 As you tramp through the bush, you can almost hear bush lawyer saying, “Hang on a minute mate,” as its multitude of backward-facing, curved prickles snag your clothing, or your bare skin, and perhaps remove your hat, or all these actions simultaneously. Colonists, noting the sheer tenacity of the plant, called it ‘bush lawyer’. Whether this was a compliment to the legal profession, or not, the name has literally clung to the plant.

New Zealand has five species of Rubus, the Latin word for ‘bramble’. They are endemic members of the rose family, a cosmopolitan family of about 1000 species. The name cissoides means like Cissus, an unrelated plant.

Rubus cissoides grows on the Three Kings, North, South and Rakiura / Stewart islands, in lowland and montane forests. It is a liane (vine) up to 15 m or more tall. The main stems are stout, up to 10 cm, or even 17 cm, in diameter, and have many branches, which are usually ‘unarmed’, i.e. they lack prickles. The leaves comprise five, or occasionally three, sharply-toothed leaflets. The branchlets, stalks, and the midribs on the underside of each leaflet are all armed with the prickles that stop trampers in their tracks.

Just as bush lawyer’s prickles grab your clothing or skin, so they enable the vine to cling to adjacent plants and to climb right into the forest canopy. If there is no plant for the young tātarāmoa to climb, it will sprawl across the forest floor until it finds one. In spring, in well-lit sites, bush lawyer produces sprays (panicles) of white, rose-like flowers with petals 5 – 8 mm long. Between November and April, the fruit, like a tiny raspberry 5 – 10 mm long, orange-red and fleshy, is an important source of food for birds and hungry trampers.

People with rheumatism used to sit over a vapour bath made by heating stones, then throwing water and tātarāmoa leaves over them. Infusions of tātarāmoa leaves have been used as a beverage and as a remedy for toothache, coughs and sore throats, stomach-ache and internal parasites.