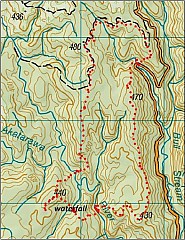 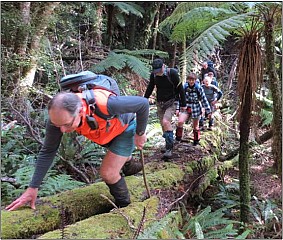 This article was first published in the Tararua Tramper Volume 85, no 8, September 2013

''The waterfall was a surprise: in a side stream, an unhurried launch into a sun-lit basin encircled by high green walls† .

We began at the hairpin bend on the Akatarawa Road (some two km below the saddle) and climbed to the spur crest, hitting the logging road at its hairpin. The road runs down to the sealed highway - it needs a sharp eye to spot the junction - but we continued on up then west then south. Easy travel. A washout at a triple confluence where what is left of Bull Stream south branch is joined by two smaller creeks. Then on our right .480, the first of four bumps on the itinerary. 500 m further south we left the logging road and continued down a broad spur towards our first wade, a crossing of the Akatarawa River on the way to Bump 440. Finding a crossing can be problematic; the hills are flat-topped but steep-sided and the main riverbed although flat and not really gorgy is often bounded by 2-3 metre high rock walls. However a broad gully led us trouble free into the riverbed and a short shingly wade downstream found a low rock step up onto the bank. A climb to .440 then on to the second wade: a side stream. But not before the leader, interpreting an instruction of "30 m. more" in a vertical rather than horizontal sense, briefly lead the party about 200 m. astray. A good side spur off .440 lead southeast down to the side stream - and the waterfall.

Wade across the stream, lunch in the sun, then over the spur and down again to the Akatarawa River. This time a much more challenging crossing: a steep 2 m. slide down beside a logjam remnant, wade, then a steep slippery 4 m. sidle/climb out onto easier ground. The third bump on the menu .430, was soon reached and we joined a good marked pad running north, paralleling the Akatarawa Road, to a fourth bump, .470. Here the pad swings west following the ridge (and eventually reaches the logging road south of .480) but we continued north down a spur and back to the hairpin: a route with some recent markers which emerges just below a (known) waterfall on Bull Stream south branch and just one corner and an 80 m. wade, our fourth, back to the cars.

Under eight hours but perhaps the second crossing made it MF.

† On a return trip in August the drop as measured with an altimeter was found to be about 7 m.