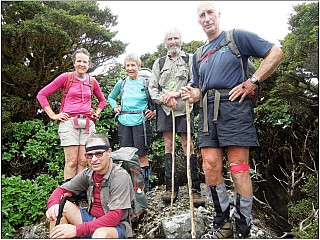 This article was first published in the Tararua Tramper Volume 88, no 2, Mar 2016

This trip was not confirmed until the night before when it was decided that the cold front would arrive late afternoon – we’d experienced quite enough cold fronts last year thank you.We started up the Orongorongo River at 8 am in fine weather, beating into a very strong wind. At 9.15 we began the climb up the spur that leads to the Rimutaka Range just south of The Peak. This spur starts beyond DoC’s locked gate on the 4WD road/track. Morning tea was enjoyed on #360 in pleasant conditions. The cold front arrived early, just before we reached the top. Luckily the wind wasn’t very strong and the moisture was mainly mist so parkas were not needed. We lunched in the small clearing on top of The Peak (864 m), then back-tracked briefly and headed north.

The ridge top here is typical Rimutaka Range: wide, undulating, with several misleading spurs. We found some helpful old permolats, but also some new red discs which seemed to be (mis)leading us down into the Mukamukaiti Stream. We took just over 2 hours to walk from where we hit the main ridge to the turn-off at #743. When the Rimutaka Ridge track is finally built travel times along the top could be halved.

The track down from #743 to the Peak Stream forks seems to wander from left to right a lot but it is very well marked so only took us about 1.5 h. Light rain was now falling as we beat our way down the river into a fairly strong southerly. I had estimated that the trip would take at least 10 hours; we beat that by 10 minutes. Although it was a fairly long day we were all feeling quite fresh back at the car park.